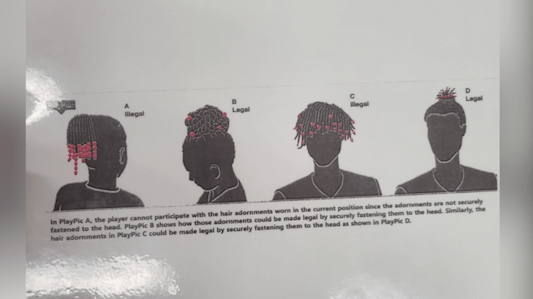 NASHVILLE, Tennessee (WKRN) – A new rule about how hair can be used for secondary basketball players has created concern.

Joshua Heard, a men’s basketball coach at Cookeville High School, said the rule was presented through an offensive and disrespectful flyer. “My group of coaches who saw this last night, [they] were so disrespected they were shocked.”

📧 The break has come to you: Subscribe to News 2 email alerts →

According to Heard, the flyer was distributed during the annual regional coaches meeting with the Tennessee High School Athletic Association. Illustrations were delivered to explain a new rule for the 2022-2023 school year.

“That first photo in the flyer is one way I’ve seen kids play with their hair for years. The image is only aimed at one group, one group,” Heard said.

A TSSAA spokesperson said the rules are overturned by the National Federation of State High School Associations.

The rule passed in April states that “Adornments made of hard material are permitted as long as they are securely fastened close to the head and do not pose an increased risk to the player, teammates or opponents.”

“To my knowledge, I’ve never seen a high school student injured because of their hair,” Heard said.

He said he has been training in the Upper Cumberland area since he was 22 years old and has never seen anything like it in his coaching career. “I just want this leaflet to go away and I want some background knowledge on why this rule needs to be put in place.”

News 2 reached out to the National Federation of State High School Associations, which said the rationale behind the rule is that it creates inclusion by preventing injury to teammates.

In an email, the TSSAA forwarded the NFHS publication with the illustration copied inside.