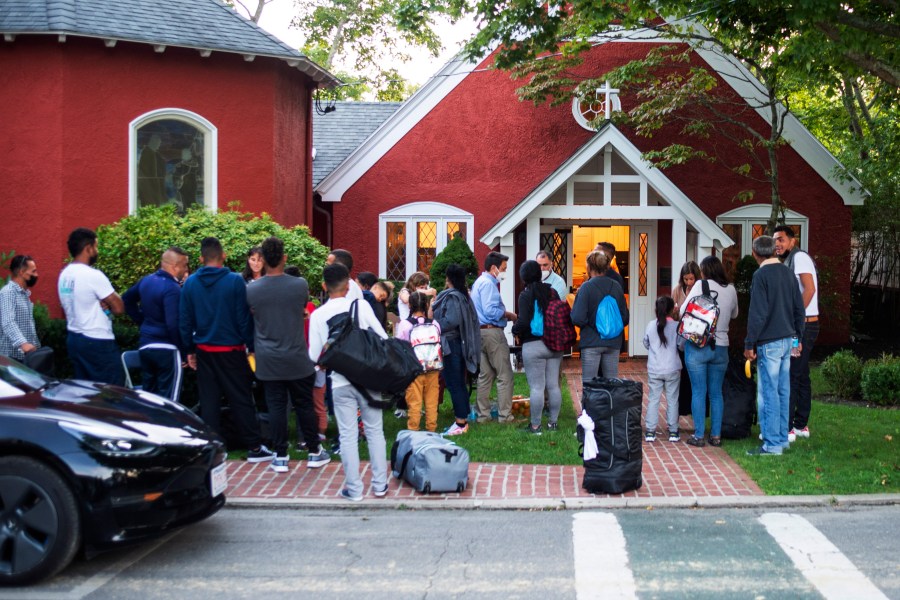 (NewsNation) – At least three Republican governors are responding to the southern border crisis by offering migrant transport to cities across the country. It’s a strategy that has become more targeted and political in recent days.

On Thursday morning, two buses full of migrants from Texas were dropped off in front of Vice President Kamala Harris’ residence in Washington, D.C.

Border city officials in Texas and Arizona say they are overwhelmed by record numbers of immigrants arriving in the country and need other cities to share the burden.

NewsNation correspondents are in El Paso, Texas, Washington, DC and Miami to keep up with the latest developments in this story.

DeSantis puts migrants on a flight to Martha’s Vineyard

Washington — On Thursday night at the “United We Stand Summit,” President Joe Biden spoke about GOP governors who transport migrants to cities across the country.

“Republicans are playing politics with human beings, using them as props. What they’re doing is just wrong, it’s un-American, it’s reckless. And we have a process for managing migrants at the border. We are working to ensure it is safe, orderly and humane. Republican officials must not interfere in this process by making these political maneuvers,” Biden said.

Read More :   Driver shaken by encounter with accused of killing who took his car

Biden continued that it is “long overdue” for Senate Republicans to come together to “provide a pathway to citizenship for dreamers, those on temporary status, farm workers and essential workers.”

“We need to modernize our laws so that companies get the workers they need and families don’t have to wait decades to get together. It’s time to do that,” Biden said.

According to reports, White House officials plan to meet on Friday morning to talk about “litigation options” on the transport of migrants.

Sacramento, California — On Thursday afternoon, California Governor Gavin Newsom appealed to the US Department of Justice open an investigation into possible criminal or civil violations related to the transport of migrants.

Specifically, Newsom asked the DOJ to look into whether migrants were tricked into accepting offers to travel to Martha’s Vineyard under false pretenses, as some claimed.

“Transporting families, including children, across state lines under false pretenses is morally reprehensible, but it can also be illegal,” Newsom said in a statement.

2:27 pm – migrants were misled about their destination

Martha’s Vineyard, Massachusetts — Local officials in Massachusetts told NewsNation that immigrants were misled about where they were going when they boarded planes in Florida.

Read More :   Strike: No work, no pay is the law and we will not break the law for ASUU teachers

Austin, Texas – Texas Governor Greg Abbott took credit for the more than 100 immigrants who were left outside the vice president’s residence on Thursday. In a written statement, Abbott accused the vice president of ignoring the southern border crisis that he said “has endangered Texas communities for nearly two years.”

“Texas will continue to send migrants to sanctuary cities like Washington, DC until President Biden and Border Czar Harris step up and do their work to secure the border,” Abbott said.

Washington DC — As she was leaving an event Thursday morning, Vice President Harris was asked if she had any comments about migrants outside her home. She did not answer.

Read More :   Review of How Much Does a CNA Trip Do in Florida Ideas

9:36 am – Leaders respond to the arrival of Martha’s vineyard

Massachusetts — Sen. Elizabeth Warren, D-Mass., replied on twitter after about 50 Venezuelan immigrants arrived on Martha’s Vineyard from Florida on Wednesday.

“Exploiting vulnerable people for political maneuvering is repulsive and cruel. Massachusetts is fully capable of handling asylum seekers, and I will continue to work with local, state and federal partners to ensure we have the resources we need to care for people with dignity,” she wrote.

7:18 am – buses were heading to union station

7:09 am – migrants outside the vice president’s residence

Washington DC — Two buses full of migrants arriving from Texas were dropped off at the residence of Vice President Kamala Harris near the US Naval Observatory complex in Washington, D.C.