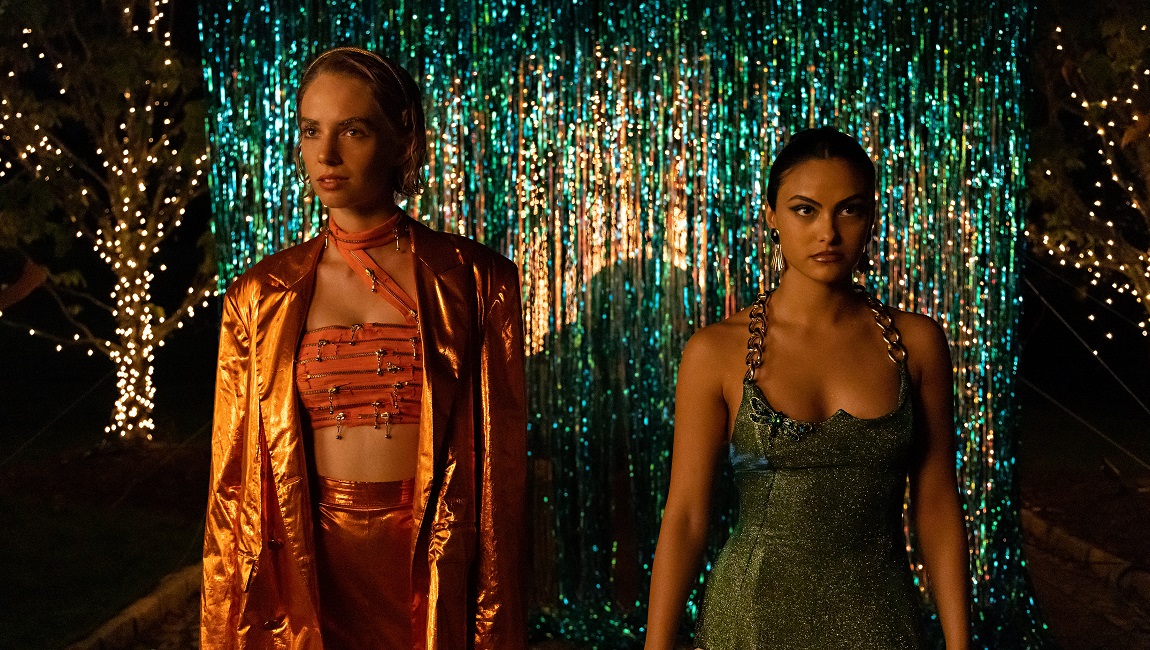 Director Jennifer Kaytin Robinson (Someone Big) would have us believe that all teenage girls are psychopaths, just as, nearly a quarter of a century ago, Sofia Coppola dreamily convinced us that there is no creature on earth more depressed than a thirteen-year-old girl. Or demonic, for jennifer’s bodyor conniving, for cruel intentions, or… the list goes on. Perhaps the best part of being a teenager is the chameleonic freedom it provides, for anyone who sees the potential for something darker in themselves.

Unfortunately, in Robinson’s newest feature film, take revenge, this darkness (or “Glennergy”, a nod to that model of unbalanced female desire, Glenn Close in Fatal Attraction) is coated with an impenetrable varnish of saccharine maximalism. Between the Bacchae parties, paper-thin social commentary, and the overall “Rich Kids of Instagram” vibe, the film quickly loses any momentum promised by its Hitchcockian plot. The result is teenage romp that is at times fun, but mostly uneven, as Robinson and screenwriter Celeste Ballard bog down a straightforward story with twists, betrayals and heavy-handed jokes that ring with the enforced authenticity of a corporate TikTok account.

It’s a story as old as time: it-girl fellow Drea Torres (Camilla Mendes) is tricked by her rich, asshole boyfriend Max (Euphoria‘s Austin Abrams) to send him a racy video, which inevitably leaks out to the entire student body of his posh private school. Adding insult to injury, Max begins dating her ex-best friend, Tara (Alisha Boe). Throughout, Drea’s inferior status is conveyed by the fact that she once wore a thrift store dress to a party and that her mother is a nurse. With Drea’s social life in shambles, enters Eleanor (Maya Hawke, the spitting image of mother Uma Thurman), who occupies the “eccentric rich kid” archetype by dint of a pet lizard for emotional support. She is burning for her own revenge against Carissa (Ava Capri), a classmate who spread cruel rumors about her in high school. Before long, the trauma exchange “you show me yours, I’ll show you mine” turns into a revenge plan that, after much fanfare and planning (including the dosage of magic mushrooms for the entire class), lands with a resounding thud.

So far, things are silly but straightforward; The PR rehab of Max’s reputation from serial cheater to ethical non-monogamist is genuinely smart. But in the second half of the movie, things get a little confusing. Before long, Drea starts flaunting some serious Glennergy of her own, while Eleanor takes on the now-empty role of Revenge Mommy with gusto, going so far as to hit Drea with her car (“It was a touch of love!”) . The machinations continue.

At nearly two hours, the film is very long and creates a lot of glaring plot holes and logical fallacies. Why does Tara keep dating Max after his nasty DMs are exposed? Why is Max’s sister Gabbi (Talia Ryder) the only one who knows he leaked the video? And why didn’t she defend Drea when the school’s victim-blaming machine sped up? For all of Eleanor’s bravado about how “everyone is gay,” so many characters persist in obsessing over a guy who is a caricature of heterosexual male privilege that he begins the appropriately ridiculous “Cis Hereto Men Championing Female-Identifying Students League” . And when the long-awaited revenge is finally done, it barely registers. Like Rose Hill’s pastel uniforms, take revenge it’s exaggerated but toothless, lacking the genuine bite of that holy grail of vengeful teenagers from the outside, heather. Instead, this dish is served warm at best. To quote Gen Z, make sense.