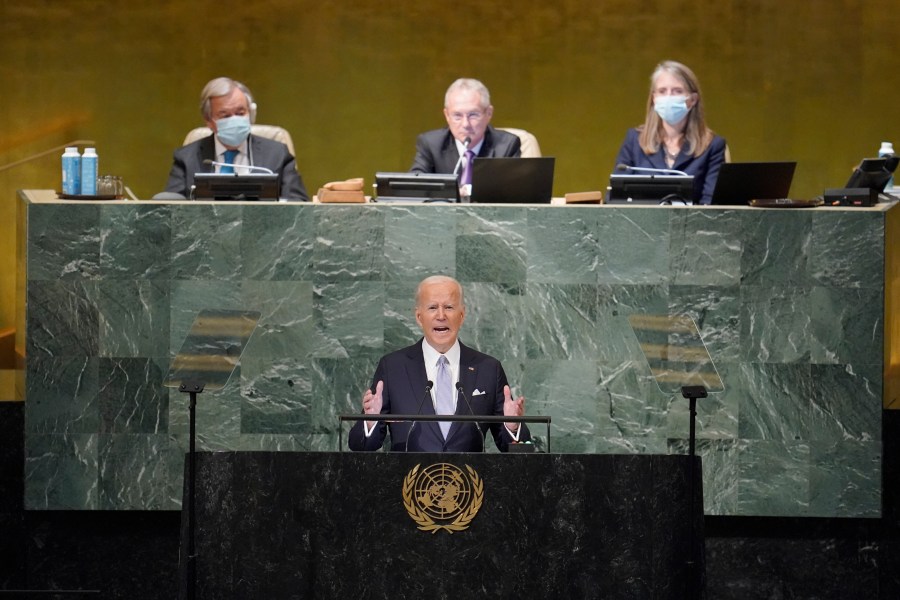 During Wednesday’s speech, Biden said Russia violated the UN charter with its “brutal and unnecessary war” in Ukraine. He said the war is an affront to the heart of what the international body stands for, as it sought to rally allies to stand firm in support of the Ukrainian resistance.

Delivering a strong condemnation of Russia’s invasion to the international body, Biden said reports of Russian abuses against civilians in Ukraine “should make your blood run cold”. He also said Russian President Vladimir Putin’s new nuclear threats against Europe showed “reckless disregard” for his nation’s responsibilities as a signatory to the Treaty on the Non-Proliferation of Nuclear Weapons.

He criticized Russia for scheduling “fake referendums” this week in territory it forcibly occupied in Ukraine.

“A permanent member of the UN Security Council invaded his neighbor, tried to erase a sovereign state from the map. Russia has blatantly violated the fundamental principles of the UN Charter,” he told his UN audience.

Biden called on all nations, whether democracies or autocracies, to speak out against Russia’s invasion and bolster Ukraine’s effort to defend itself.

Biden also highlighted the fallout from the encroachment on the world’s food supply, pledging $2.9 billion in global food security aid to address shortages caused by war and the effects of climate change. He praised a UN-brokered effort to create a corridor for the export of Ukrainian grain by sea and called for the agreement to continue despite the ongoing conflict.

Read More :   An interesting story about how Rahul Maharaj got into the mental health improvement campaign

But the crux of the president’s visit to the UN this year was his outright censure of Russia as its war nears the seven-month mark.

Biden’s speech on Wednesday comes as Russian-controlled regions in eastern and southern Ukraine announced plans to hold Kremlin-backed referendums in the coming days to become part of Russia and when Moscow is losing ground in the invasion. Russian President Vladimir Putin on Wednesday announced a partial mobilization to call up 300,000 reservists and accused the West of engaging in “nuclear blackmail”.

The White House said global food security funding includes $2 billion in direct humanitarian assistance through the US Agency for International Development. The balance of the money will go towards global development projects aimed at increasing the efficiency and resilience of the global food supply.

“This new $2.9 billion announcement will save lives through emergency interventions and invest in medium to long-term food security assistance to protect the world’s most vulnerable populations from the growing global food security crisis.” said the White House.

Biden is facing many difficult questions as leaders meet this year.

In addition to Russia’s war in Ukraine, European fears that a recession could be looming are heightened. Government concerns grow on a day when time is running out to revive the Iran nuclear deal and over China’s unrest over Taiwan.

In addition to diplomacy, the president is also doing some politicking. This year’s meeting takes place less than seven weeks before the midterm elections in the United States. Shortly after arriving in Manhattan on Tuesday night, Biden spoke at a Democratic National Committee fundraiser for about 100 attendees that raised nearly $2 million, and he is expected to hold another fundraiser the Thursday before to return to Washington.

His Wednesday speech comes just after Ukrainian forces regained control of large swaths of territory near Kharkiv. But even as Ukrainian forces rack up battlefield victories, much of Europe is feeling a painful rollback of economic sanctions imposed on Russia. A big drop in Russian oil and gas has led to a sharp jump in energy prices, triggering inflation and increasing the risk of Europe slipping into recession.

Biden’s visit to the UN also comes as his administration’s efforts to revive the 2015 Iran nuclear deal appear to have stalled.

The deal brokered by the Obama administration — and scrapped by former President Donald Trump in 2018 — provided billions of dollars in sanctions relief in exchange for Iran’s agreement to dismantle much of its nuclear program and open its facilities to wide international inspection.

Reports: Migrant plane heading to Delaware did not show up on Tuesday

Biden, during his time at the UN General Assembly, also planned to meet on Wednesday with new British Prime Minister Liz Truss and press allies to meet an $18 billion target to replenish the Global Fund to Fight AIDS, tuberculosis and malaria.

This year’s UN meeting has returned to a large-scale in-person event after two years of reduced activities due to the pandemic. In 2020, the face-to-face meeting was canceled and leaders gave pre-recorded speeches; Last year was a mix of in-person and pre-recorded speeches. Biden and First Lady Jill Biden were due to host a leaders’ reception on Wednesday night.

The Associated Press contributed to this report.